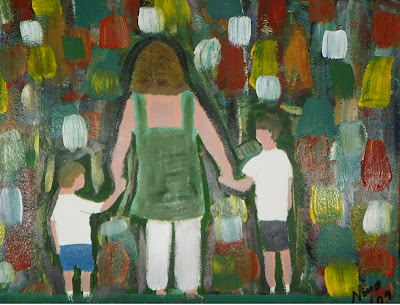 Just as I thought I had managed to explain to my children the importance of helping our neighbors and working together for a good cause, I was slammed with the news that we, as a nation, took part in an assassination.  I’ve struggled heavily with my stance on this and I’m finally comfortable presenting my opinion.  Obviously it has taken me the better part of ten days to write this so you know I didn’t come to this decision abruptly.  The positives and negatives have been weighed heavily by me, the discussions have continued from one day to the next with my ex-military husband and sleepless nights have yet to come to an end.

My children are 6 and 8; we took them into one of the tornado devastated areas just two days prior to the killing of Osama Bin Laden.  My children are extremely emotional and tender-hearted young boys.  I honestly had no idea that seeing the destruction of one town, their homes, their churches, their historical buildings and more would upset them in a way that saddened me.  I consciously made a decision to protect my children for as long as possible.  Both boys were upset in many ways and the youngest, who was already scared of thunder, lighting and even heavy rains, may never rest at the news of an oncoming storm.  I was determined to protect my kids for as long as possible.

Then, I’m startled the very next night with the news that our country had not only captured Osama bin Laden, a terrorist, but we had killed him.  A terrorist; a man who wreaked havoc on our nation almost ten years ago and was apparently plotting an anniversary attack, was dead.  How was I to explain this act to my children?  Obviously, bin Laden was not a good man; he masterminded the deaths of many which goes without debate.  Did he deserve to die?  That’s really not for me to decide, but I had to figure out a way to explain to my children yet another event that resulted in death.

I watched as people cheered in the streets of Washington DC when the announcement was made.  I listened as my husband was excited to know that our military had taken action under the direction of the President of the United States.  I pondered how to explain this to my kids since their father would be at work when they hit the floor running that morning.
They were out of school due to the damage from the storms so I didn’t need to worry that they would hear the news at school.  I did what any scared and unknowing parent would do; I opted to tell my children nothing.  Now, as my husband’s hometown is being flooded, I’m faced with the emotional turmoil of explaining one more of life’s little mysteries to my children.
How long can I continue to take the high road and leave my children’s education to chance?