Once Upon a Halloween Witch 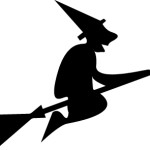 This is by no means a new idea that I have had.  I simply took the suggestion from someone else and ran with it.  Halloween is a time for ghouls of fun if you are creative.  The trick to having fun in my opinion is to keep the fun appropriate for the age of the children.  And, in my opinion, children have absolutely no need for mounds of candy.  But, that’s one aspect of the holiday I simply can’t seem to fight.  I guess that technically speaking, adults don’t need that much candy either but at our house, we at least try to keep it in adult hands.

We began the Halloween Witch story when my first born was only one.  Here’s how the whole gig works out in our house.  We handle the Trick or Treating like any other family you know.  But, once we arrive back home, we get busy.

The boys first get out of their costumes and we clear a large path in the floor.  They empty all their candy out of their pumpkin heads and their bags and then they start sorting.  They are allowed to start eating candy once they get it and they keep eating and sorting until bedtime.

Once they are given the fifteen minute warning for bedtime, they separate out the candy that remains that they like and want to keep versus the candy that they aren’t fond of.  Once they have narrowed their selection down, I give them a quart size bag with a zipper top and they are allowed to fill it up.  Once it is full though, no more candy can be kept.   They figure out how to keep as much candy as possible and then we tuck the unwanted candy to the side and prepare it for the Halloween Witch’s arrival.

Once the boys are sound asleep, the Halloween witch sneaks in and retrieves the extra candy and leaves a book and a small toy.  She has been known to leave more some years than other but the general principle remains.  The Halloween Witch then takes the left over candy away never to be seen again in this house.  Luckily, the Halloween Witch leaves for work really early so there’s no chance of getting caught.

And, there you have, the story of the Halloween Witch, keeping sugary candy out of the hands of little children all over the world whilst promoting literacy.

3 comments on “Once Upon a Halloween Witch”