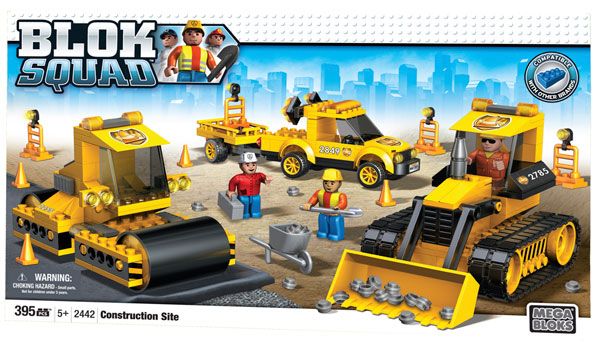 Growing up I was a bit of a Tom Boy which is funny because I loved to play race cars, make mud pies, ride dirt bikes and play with the boys in the neighbourhood but I also like to put on a dress now and then.  One of the things I loved most as a kid was to play with build-a-sets like this Mega Blocks Blok Squad Construction Site set.  Of course back then we didn’t have the luxury of the cool premade sets such as this one but I had bins and bins of building pieces to set my creativity on fire.

Hubs parents still has his bins of building pieces that they haul out of the basement when the kids come over.  I love watching their little imaginations come to life; it’s nice to watch them play with something other than an electronic and get back to the basics of play.

My nephew is an avid Block Quad collector but if you asked him he would say he’s not a “Lector”, he just likes to play with his “guys”.  He already has bins upon bins of these Mega Bloks sets and he knows every one of their names and which piece belongs where; I do not know how he can keep them all straight.  When he opened up the Mega Bloks Blok Squad Construction Site set box, after I reminded him to keep the pieces away from my toddler, he quickly lined up his guys to watch the construction and went to work building his “machines”, as he called them.  The boy spent hours sitting there patiently putting the set together, with little instruction I must add, and then playing with the completed set.  His favorite parts about the set are the little men that he can put inside the equipment, so cute with their little hard hats and tools, and scooping up the little rock pieces with the machines.  As I watched him, he arranged a little course out of the pylons and construction hazard light pieces and took time to maneuver his machines through; I was impressed that he could plan that out at the age of 5.  There were a few pieces that he struggled a little bit to put on the machines so his mom and I helped but overall the pieces were fairly easy to put together and the best part was that you could tell he had a lot of fun sharing the building with us.  With 395 pieces this set was a lot of fun, one you will have to set aside some quality time and enjoy.

Mega Bloks has several character building sets to choose from, all at reasonable prices; any future builder will have a blast putting them together.  I recommend these Blok Squad sets to add to your kids Christmas list this year, if they haven’t already added one themselves.  Recommended for ages 5 and up.  Head over to Mega Bloks Facebook Fan Page and follow them on Twitter to keep posted on any new additions, updates or sales.