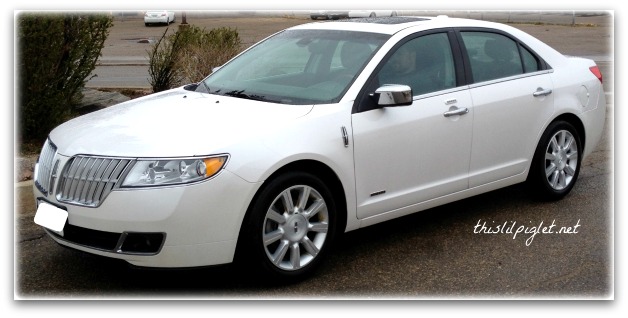 The moment I picked up the 2012 Lincoln MKZ Hybrid to drive I could see luxury written all over it.  From the cool name to the sleek modern design, the MKZ holds up the Lincoln reputation, classy and timeless.  Admittedly I was a bit consumed by the looks and feel of the vehicle but it was quickly realized the difference a Hybrid engine makes with almost three times better gas mileage than the non-hybrid model. 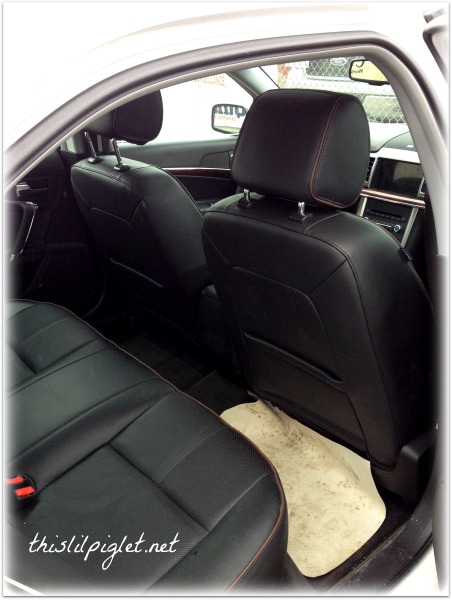 The interior is impressively adorned with the luxurious  Bridge of Weir™ leather-trimmed, 10-way power seats and driver memory; dual-climate seating, select a heated seat or an air conditioned seat by the push of a button.  Personally one of my pet peeves is having to readjust the drivers seat every time Hubs drives the vehicle; having the driver memory seating option was a relief.  Upon opening the back door I noticed the obvious leg room that a mid-sized luxury sedan offers; with regular back seat passengers this is a must-have on our list.  Expectedly, the seats were more comfortable than other vehicles but what I loved most was the noticeable noise reduction.  The cabin of this vehicle is so well insulated that you are ensured to have limited outside noise interfere with your ride; a word of caution, this feature may lock the interior noise in and with loud kids, this may not be enjoyable. 😉 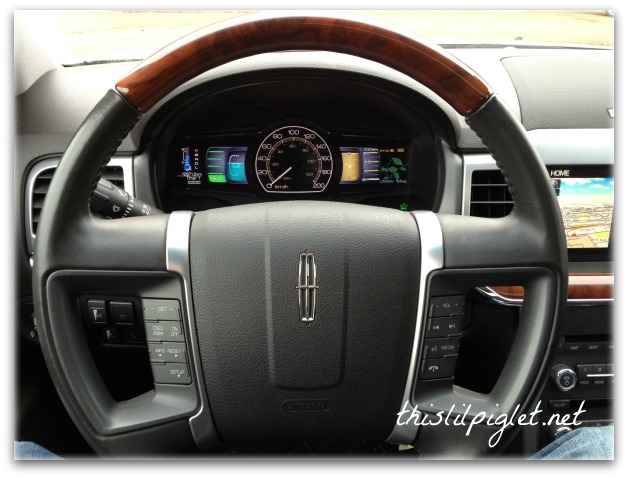 After admiring the obvious comfort of the Lincoln MKZ, I couldn’t help but notice the added touch of the beautiful wood grain trim on the dashboard and center console, containing the touch screen media centre.  Everything from GPS navigation, satellite radio, climate control to voice activation was available via the steering wheel or touch screen console, making the Lincoln MKZ very easy to navigate around and making your drive more enjoyable.  Although I thought the LED dashboard and illuminated Lincoln logo viewable upon opening the door were nice touches, I was a little unimpressed by the plain look of the rest of the console; I like something a little more flashy myself but this is simply my personal taste.

Two main features of the 2012 Lincoln MKZ that were my personal favourites, were 1. the blind spot sensors located on the side mirrors and 2.  the Hybrid engine:

1.  When a vehicle beings to pass a light goes on and off on the side mirror on the passing side of the vehicle as it moves in and out of your vehicle “blind spot”.  I thought this was an excellent added safety feature to assist drivers from passing while a vehicle is in their blind spot; possibly preventing a collision.

2.  Being that I am always conscious of my families impact on the environment, the Hybrid is a smart way to cut your carbon footprint.  At first I was unaware that this was a Hybrid model. When I first started the Lincoln MKZ I didn’t think it was running; the engine could not be heard like other vehicles. Looking at the odometer area I could see a battery charging lit up and when I put the vehicle in drive to step on the gas, I realized it was in fact started.  This is the first time I have driven a Hybrid vehicles and can only compare it to a regular gas engine which was obviously different.  It almost seemed like there was a bit of a delay BUT in reality there was no delay at all in pick-up.  From my understanding on how the Hybrid engine works, the electric portion of the Hybrid engine runs whenever possible, which is was saves enormously on your gas mileage and when you need to step on the gas to pick up speed, your gas engine kicks in and gives you that extra power.  I was concerned that the vehicle would have less power than a regular gas engine but by after testing the engine out, I can tell you that there is no less power in a Hybrid model; a Hybrid engine only benefits you by giving you big savings on your gas mileage. 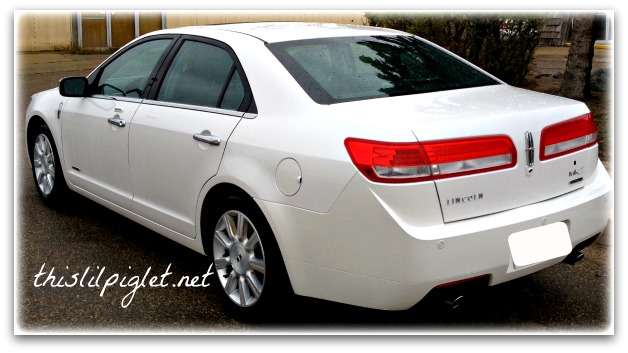 The 2012 Lincoln MKZ Hybrid full of comfort, the newest technology and a sleek modern look, clearly full of the added touch of luxury features, was a pleasure to review and was effortless to drive.  Not only does the Lincoln MKZ give you pep when you need it, the SmartGauge™ with EcoGuide  assists you on getting the best gas mileage possible on your drive, almost like a personal driving coach. One fact I’m excited about is that the Hybrid uses your own braking power by recycling it back into recharging your engine battery pack.  This mid-sized luxury car would be the perfect vehicle for an eco-conscious family of four or five; one vehicle you can be proud to drive.

Disclaimer:  I was loaned this vehicle, as part of the Ford Canada media fleet, for one week to review. All opinions are my own, belong to This Lil Piglet and have not been influenced in any way.