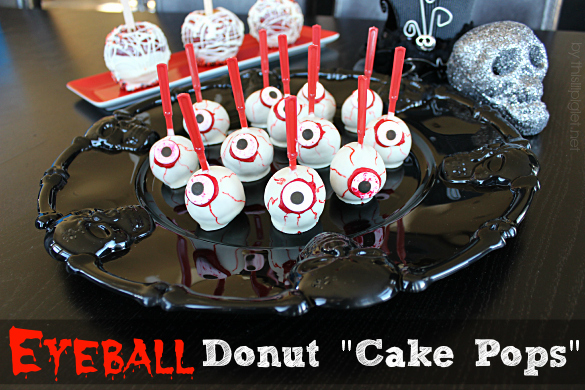 Donut cake pops you ask? Yes! These “cake pops” are so easy anyone can do them. The baker in me is completely against this; I mean it’s not a cake pop unless you slaved over the recipe of a truffle-like texture from scratch, right? Wrong. I came up with the bright idea to host a Halloween party for 12 tween girls this weekend. Before the words fell from my lips, I was already kicking myself. The entertainer in me insists on a themed spread of good food, all made by your truly, and entertainment and I certainly did not have the time to bake from scratch all the little themed eats I wanted to spread out.

Hubs didn’t seem too keen on the idea of coming up with Halloween entertainment for a bunch of girls but I know secretly he’s loving every minute of plotting his scare tactics, better known as a haunted house. All I’ve been hearing over the last few days are sounds of saws, drills and the eerie sounds of god knows what decorations he has going on out in the garage. Apparently it’s off limits until the big reveal.

Back to these tasty Eyeballs. Really. These Timbits may look disgusting but they are delicious and are the perfect addition to your coffee and the best part, they are super easy to make!

I had a little helper so we decorated each eyeball completely one at a time but if I were to do it alone, I would probably do all the lines for all 40 first then move onto the next step. Find whatever works for you.

What donut hole cake pops will you be making? If you like this, I would love if you would show me some love and pin it on Pinterest.

« Previous PostWhere to Stay: The Cabins at Disney’s Fort Wilderness Resort for Large Families
Next Post » Pamper and Shop it up @ntlwomenshow #NWSToronto