For 2 years I was a Chicken Farmers of Canada Brand Ambassador and although I no longer hold that role my commitment to chicken holds stronger than ever. I have since moved into one of the leads on their Digital Marketing team which should point out how much of a HUGE fan of chicken I am. I continue to share my chicken recipes and from time to time you will see a Chicken Farmers of Canada presence on my blog with recipes from the Chicken.ca website, contests, Twitter parties and of course the ever-exciting chicken news as it roles out.

Chicken IS a Super Food

Whenever there was discussion about the making the healthiest protein meat out there even healthier, skin…the juicy to die for skin…was always the culprit. Everyone knows that skinless chicken is the way to eat healthier protein with less fat and skin-on is a no-no but guess what? Everyone is wrong! Cooking skinless chicken deprives the chicken of moisture and worst of all, affects the skin-on juicy flavour you love.

Chicken Farmers of Canada has informed me of a new study showing that we can Cook Healthy Chicken with Skin On.

As part of a recent nutrition study undertaken by Chicken Farmers of Canada, full details to be released later this month, a remarkable breakthrough was discovered. While a skinless cut of chicken does contain less fat and calories, a skin-on cut can attain similar nutritional value if the skin is removed prior to consumption. This means that you can cook your chicken with the skin on, retaining all the moisture and flavour you love, and then remove it prior to serving to achieve essentially the same health benefit as a skinless cut.~Chicken Farmers of Canada

Find out more specifics about the study HERE.

Join us on March 27th at 9pm EST for the #ChickenSuperFood Twitter Party! 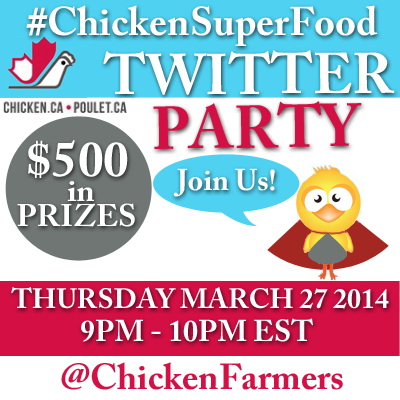 Prizing: To be announced.

RSVP on the linky below!

Disclosure: I am participating in the Chicken Farmers of Canada Chicken Super Food campaign; this is a sponsored post. All opinions are 100% my own.