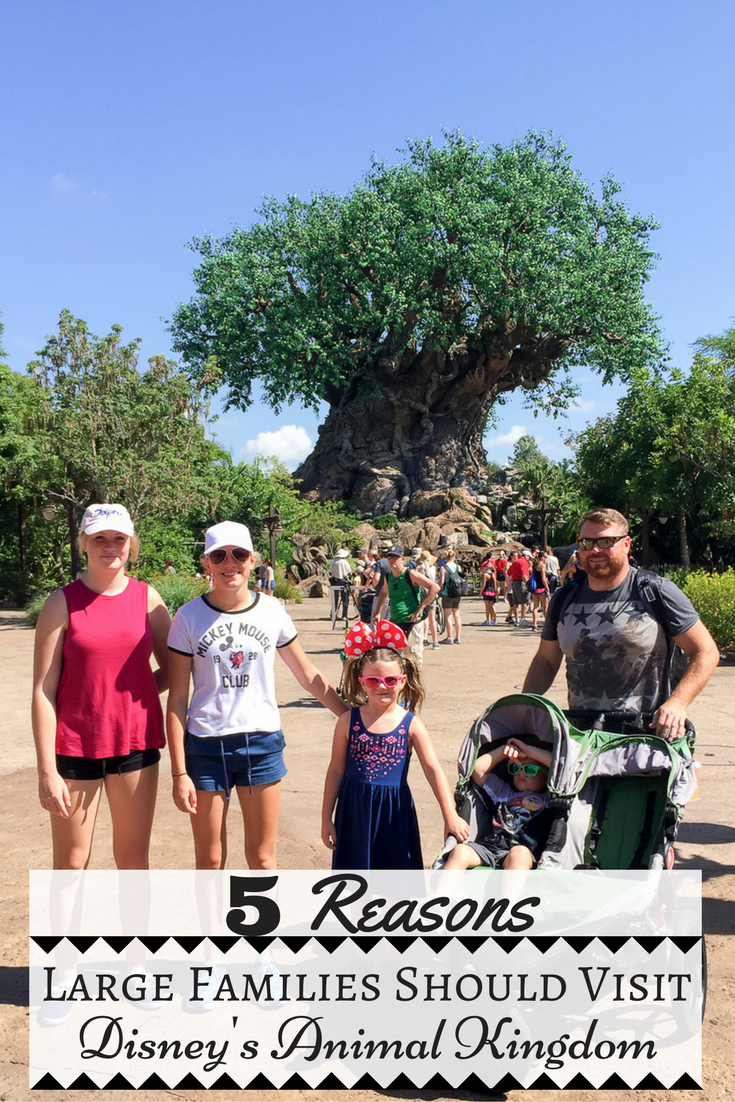 This summer we took our family to Orlando, Florida where we had planned a week exploring the areas attractions before heading off on our cruise. We’d been to Walt Disney World before and wanted to explore some other things but wanted to return to Walt Disney World for our favourite park, the Disney’s Animal Kingdom. Here are our favourite features of the park for large family travel:  5 reasons families should visit Disney’s Animal Kingdom. 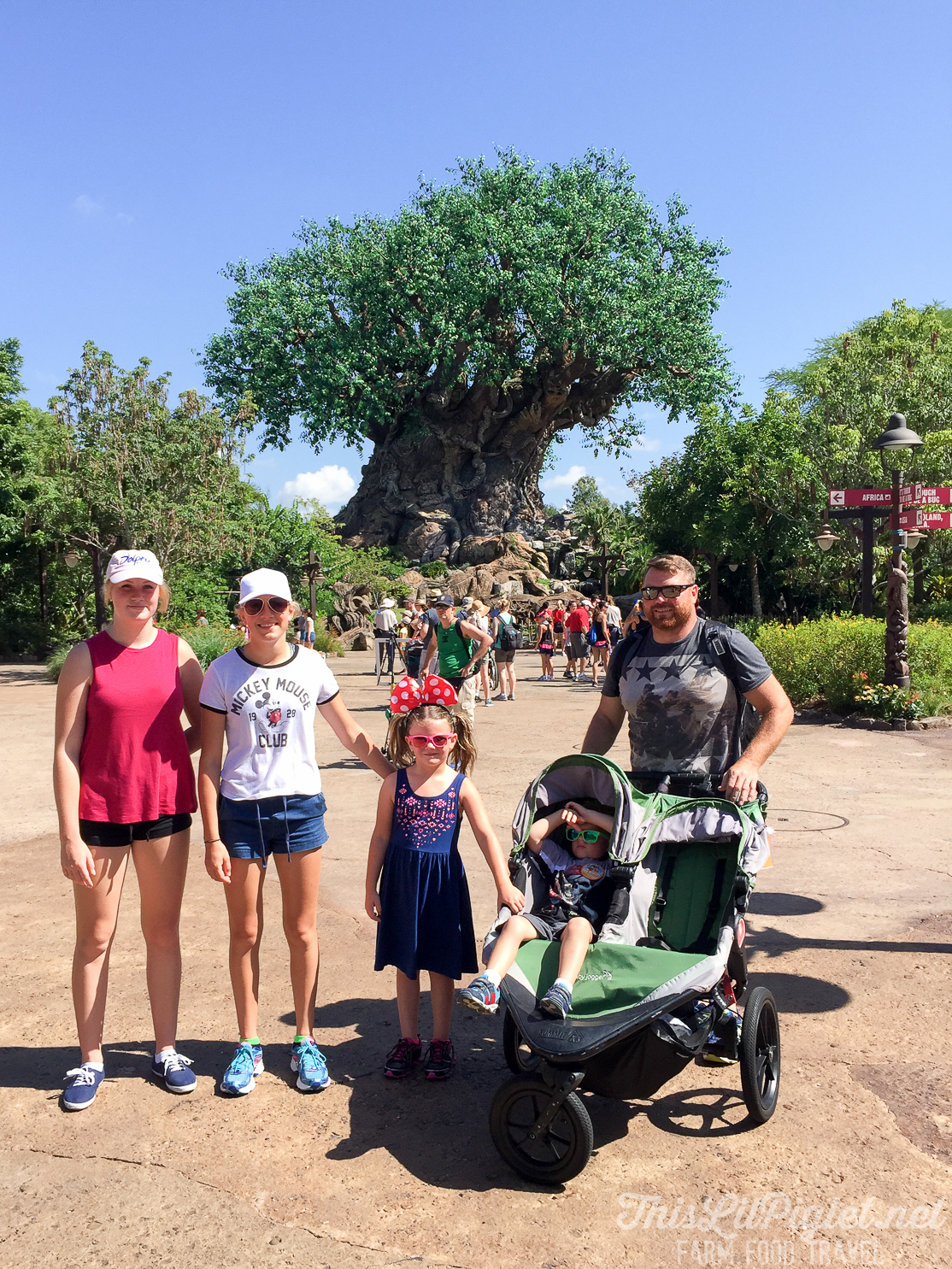 When you enter the park you walk through some exhibits on your way to the main area where the park disperses into the different areas. As you walk across the entry bridge to Discovery Island, you see the vision of the Tree of Life. With its height at 145 feet and its intricate detail of over 300 animals sculpted into the tree, this tree is not only impressive, it represents the circle of life. 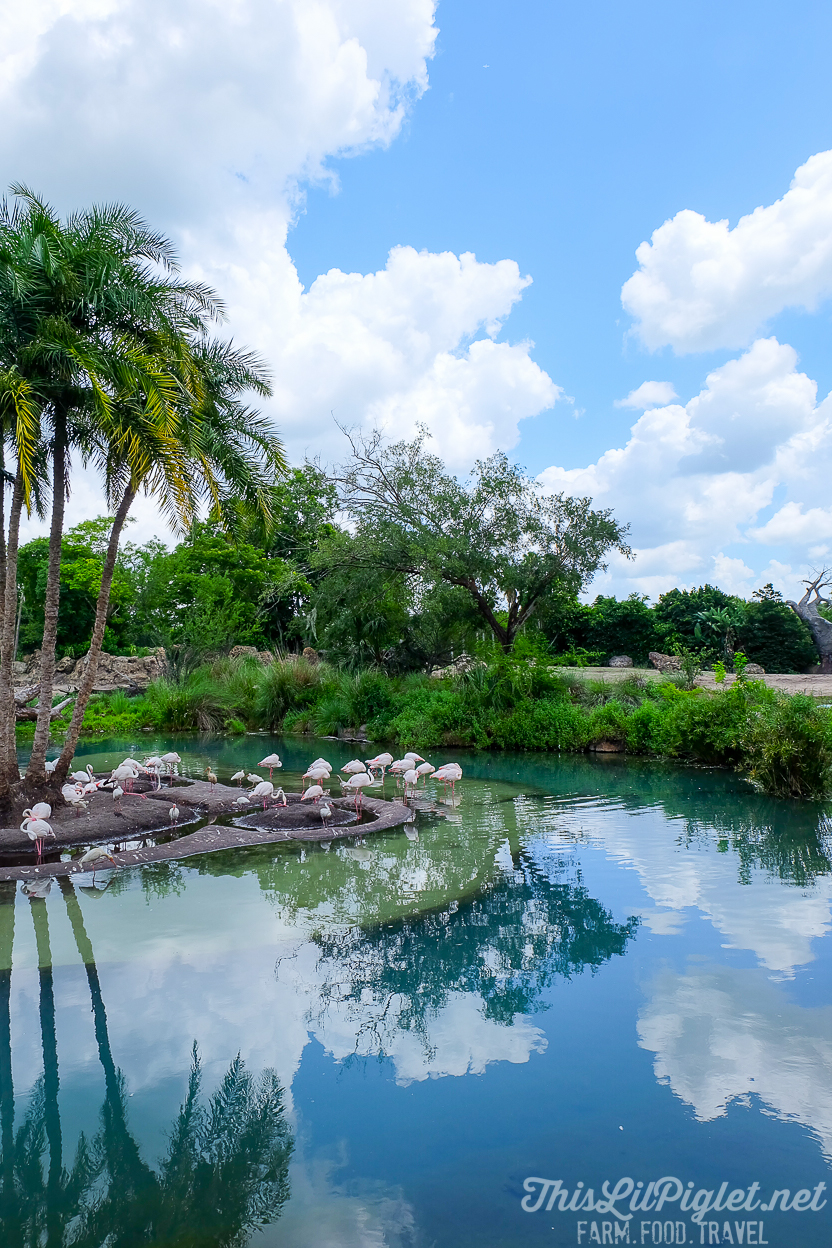 The Animal Kingdom is a complete learning experience but the safari is our absolute favourite ride in the Animal Kingdom. The whole family can ride in an open jeep across an African safari exhibit to see which animals you come across. Spot elephants, lions, zebra and hypos to flamingos, the Kilimanjaro Safari will be a nice way to get out of the sun and learn about these amazing animals. 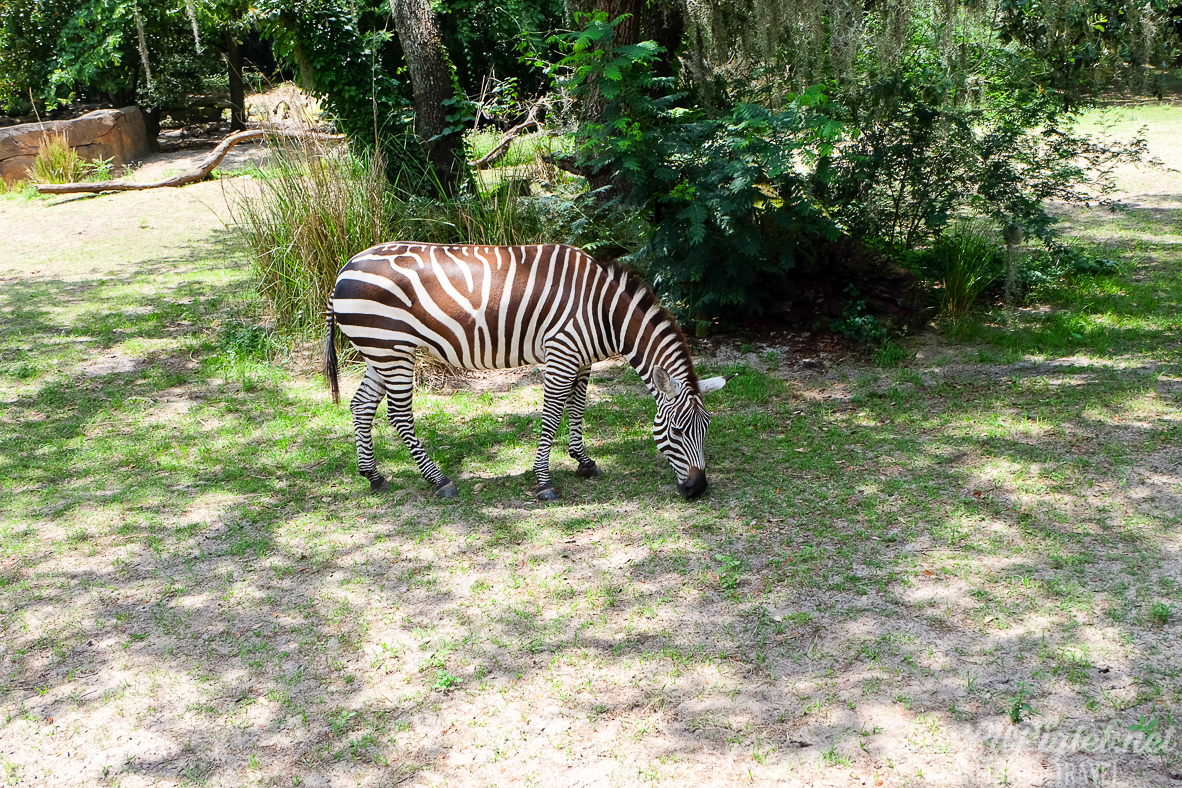 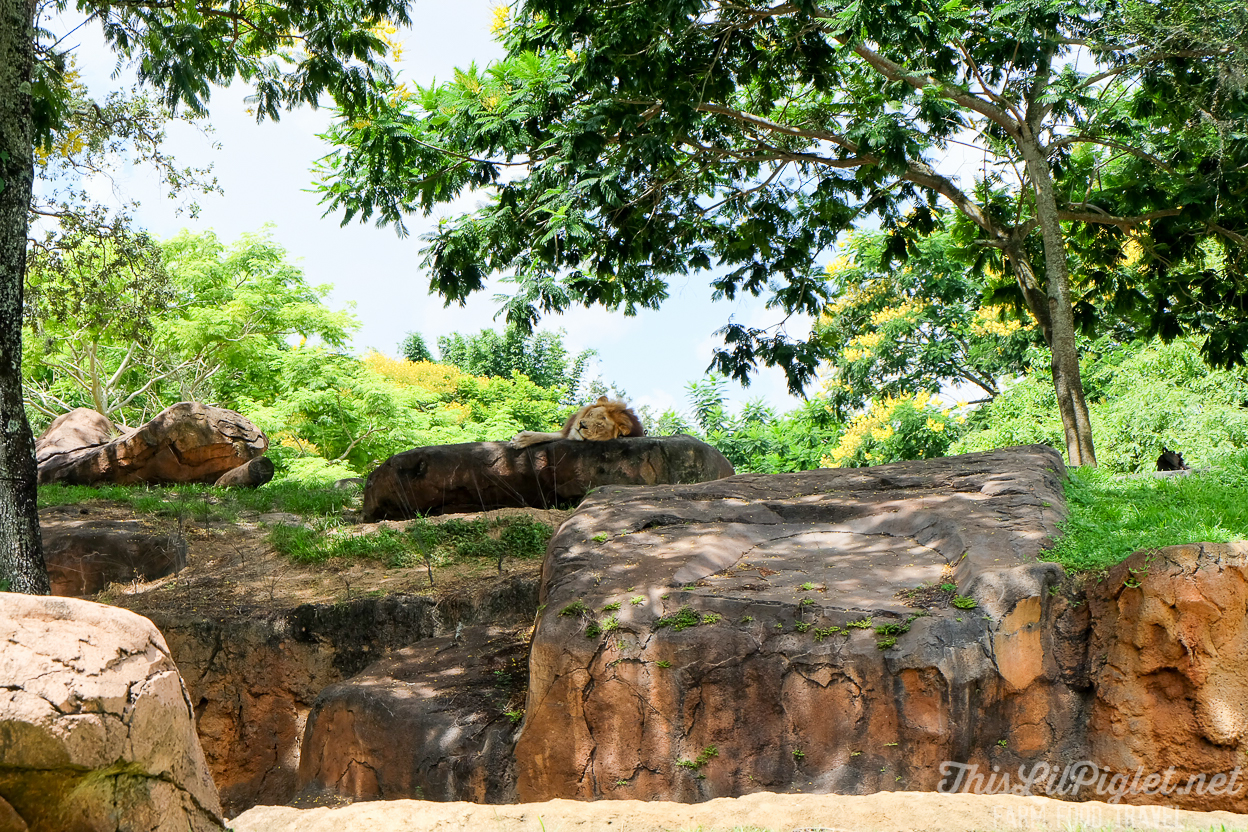 Take a walking tour through the Pangani Forest Trail where you will find exhibits of mole rats (umm, gross but cute at the same time), insects, birds and more. Through the trail you will come to the Gorilla exhibit where you can see these magnificent creatures interact with their troop and learn about evolution. This was our younger kids favourite part of the park and it was a great way to get out of the sun. 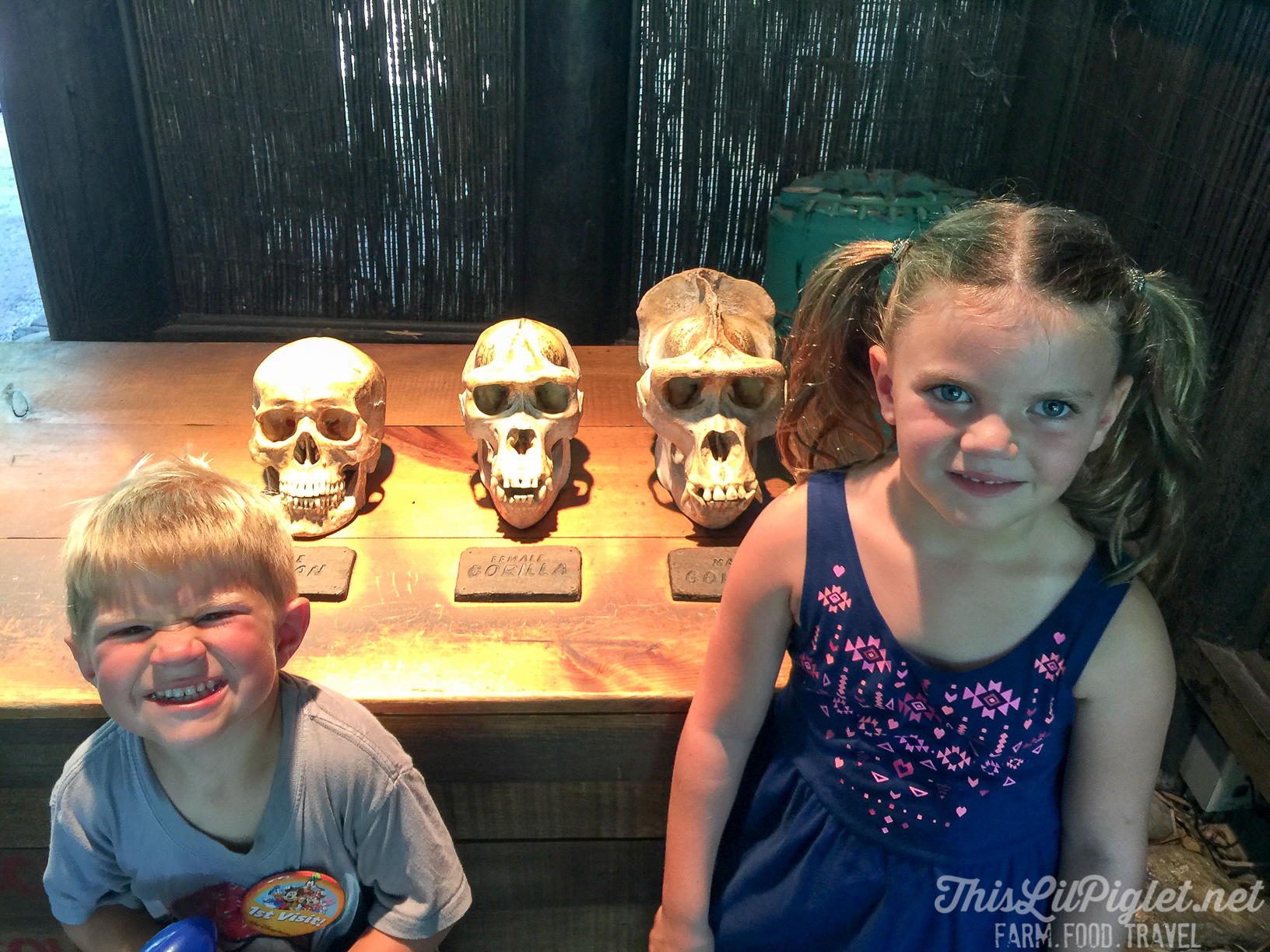 3. Where to Eat – Africa Harambe Market

The Harambe Market at the Animal Kingdom is the best place to grab a meal, in my opinion. Mama’s, you have to try the famous corn dog sausage and red sangria. Okay, okay…the two probably don’t pair well but that’s besides the point; sausage and ale and sangria for later perhaps. 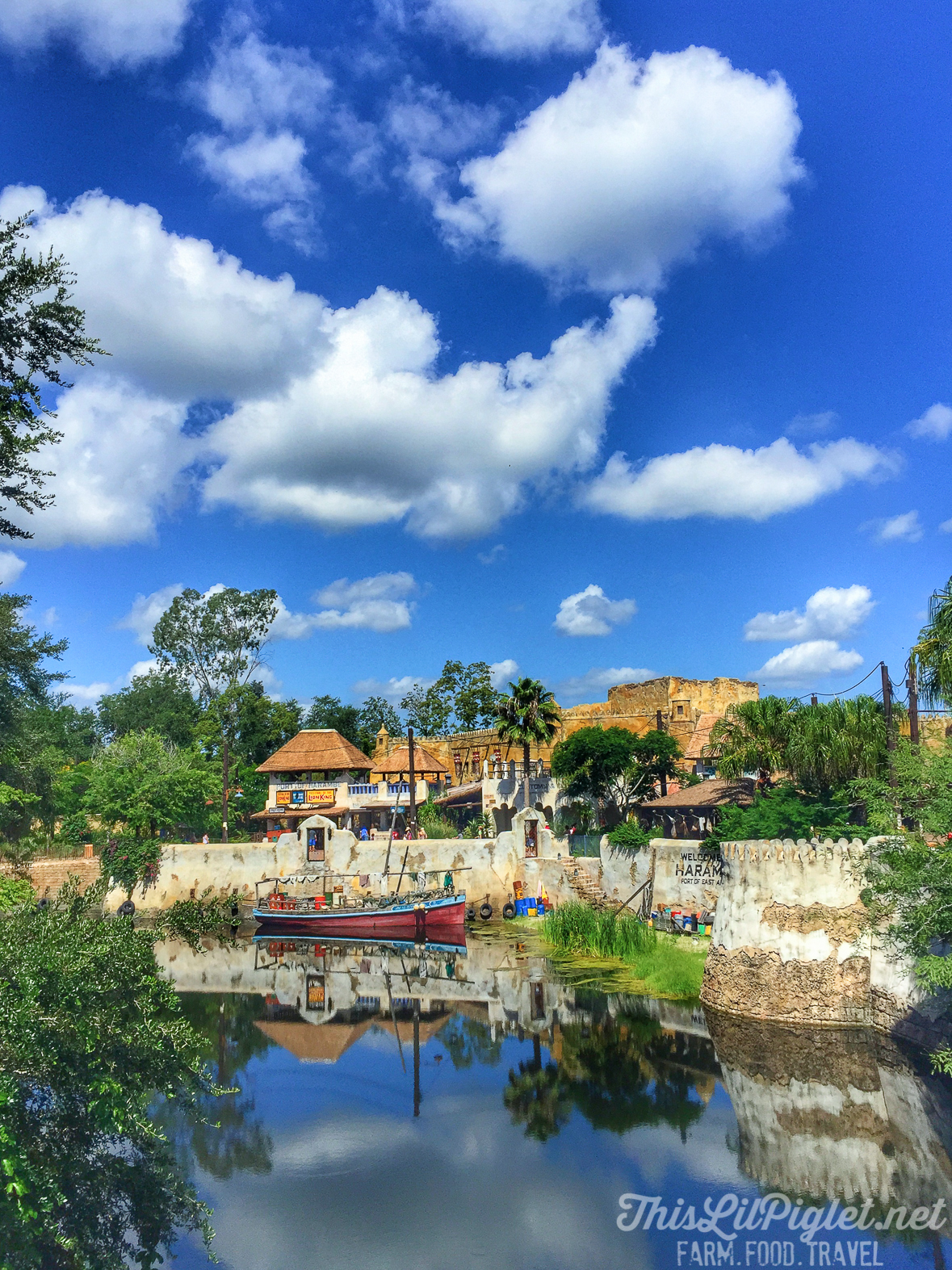 Our teens couldn’t help playing the part in the market with the props. With this scenery through the market, it’s no wonder they had fun with it and left with smiling faces.

These two teens were a quick sprint to Expedition Everest – Legend of the Forbidden Mountain which they insisted on going on more than once. They even convinced our 6-year-old to go on the ride. She made the height requirement but was a little nervous until her first ride was complete and then…she begged me to go on again. 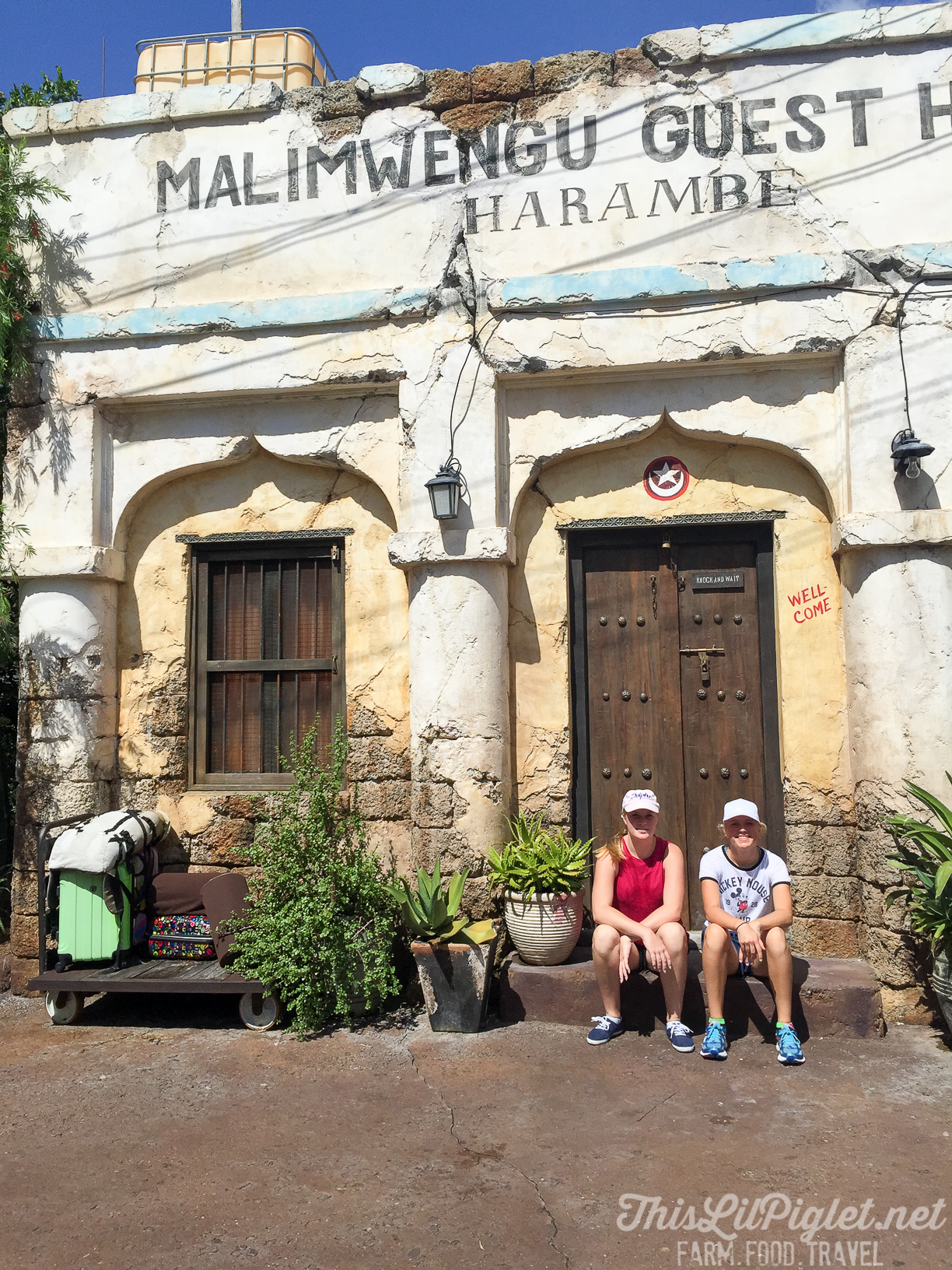 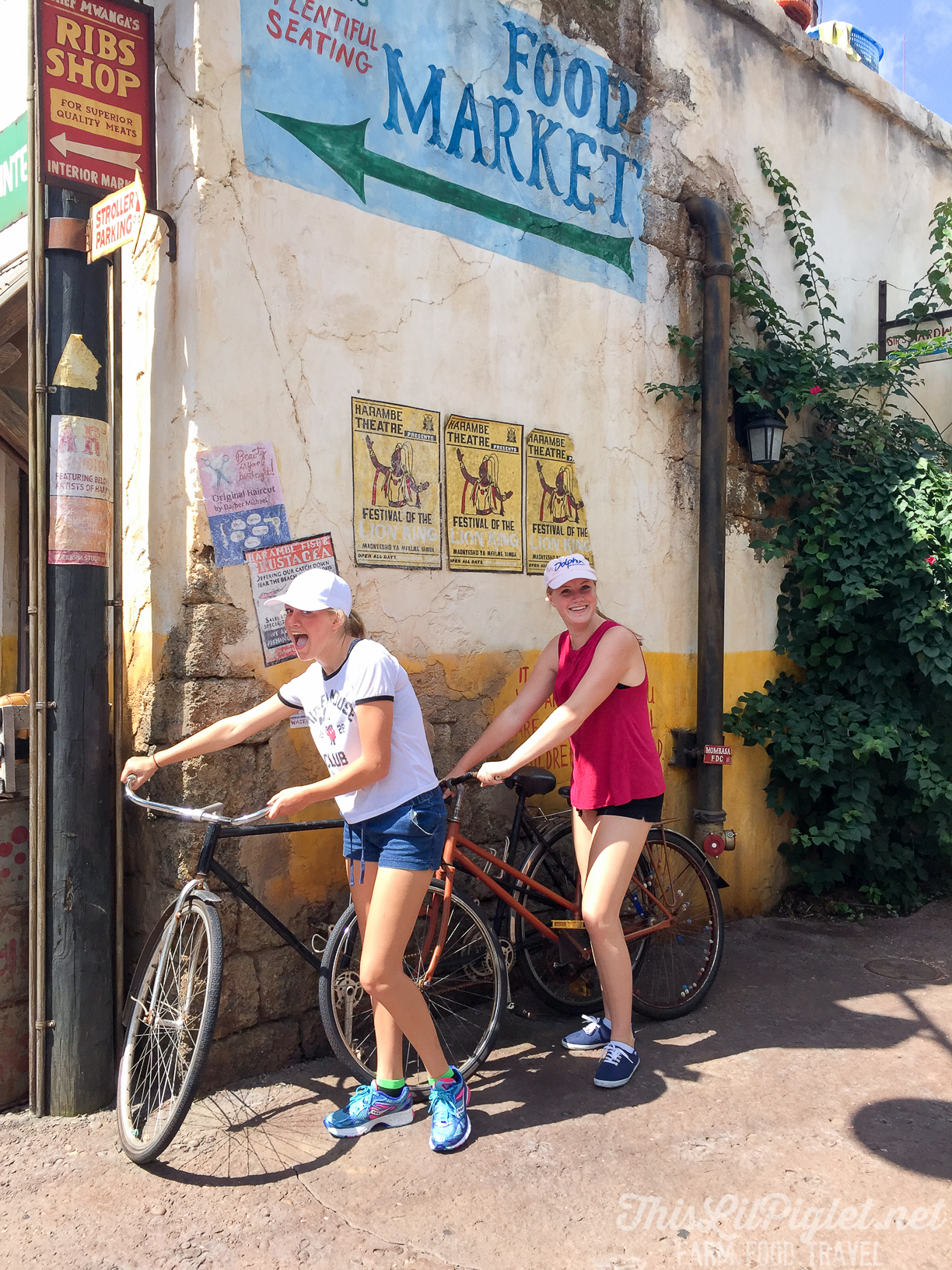 What’s to say about DinoLand except that it is the best place to be when you are a little boy…or a big boy, depending on who you’re asking. Cough. My husband. If you’re a family of dino-lovers, you will appreciate everything DinoLand has to offer. 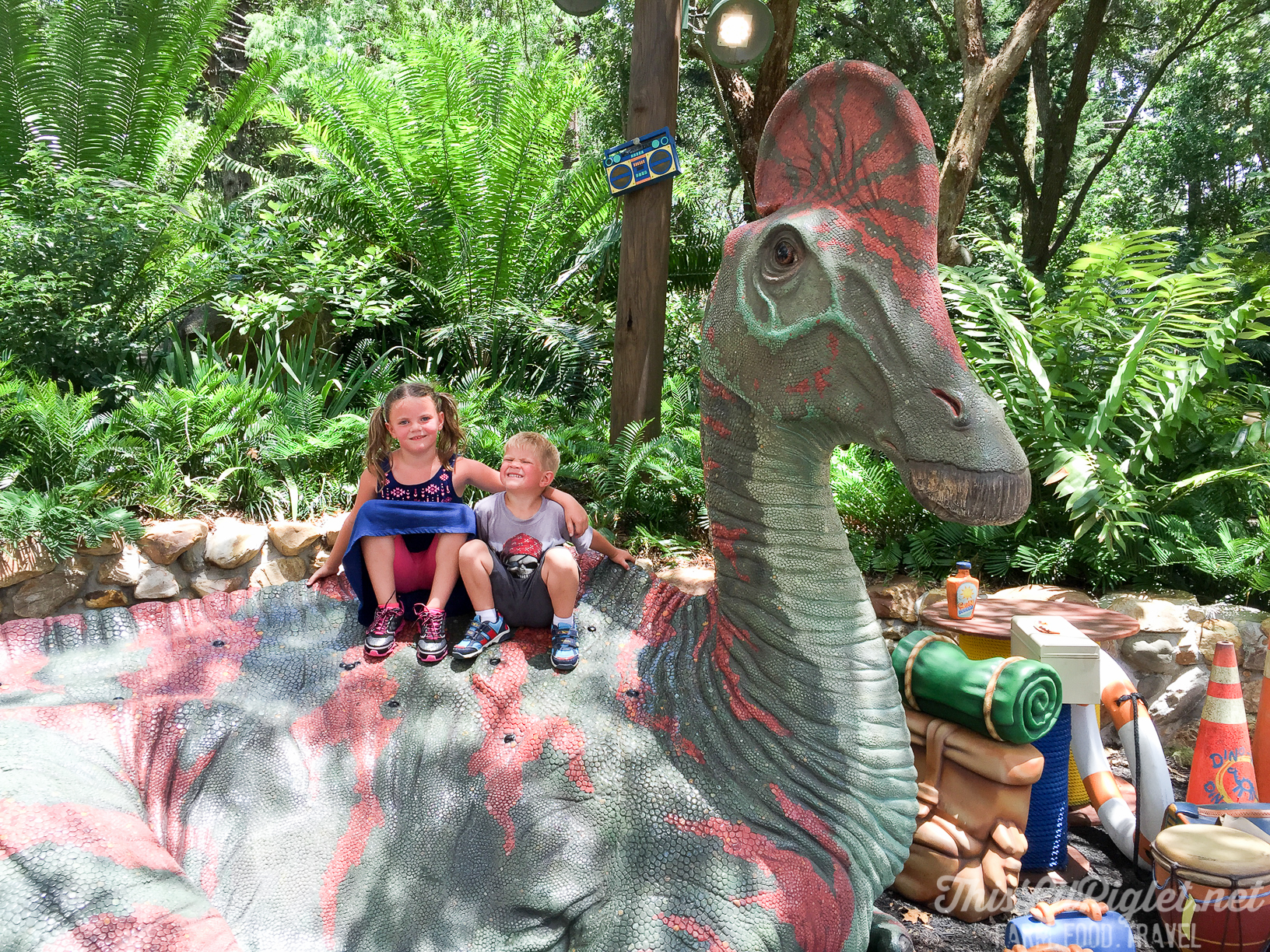 If you are spending a day at the park, make sure you stop at the Wilderness Explorers booth before you venture off into different areas of the park to give your kids extra time to get their badges. Your kids will have fun exploring the Animal Kingdom and learning about the parks animals and habitats at the same time with this self-guided tour.

Disney’s Animal Kingdom guests become Wilderness Explorers in an all-new self-guided experience aimed at deepening their understanding of animals and the natural world we live in. Inspired by Russell, the wilderness explorer in the Disney-Pixar film “Up,” park guests can earn approximately 30 sticker badges in adventures exploring the theme park, completing various activities and solving puzzles along the way. Topics include everything from studying the animal inhabitants of the park to learning animal nutrition to combing through a dig site and identifying fossils. Headquartered on Oasis Bridge, Wilderness Explorers is included in Disney’s Animal Kingdom admission. 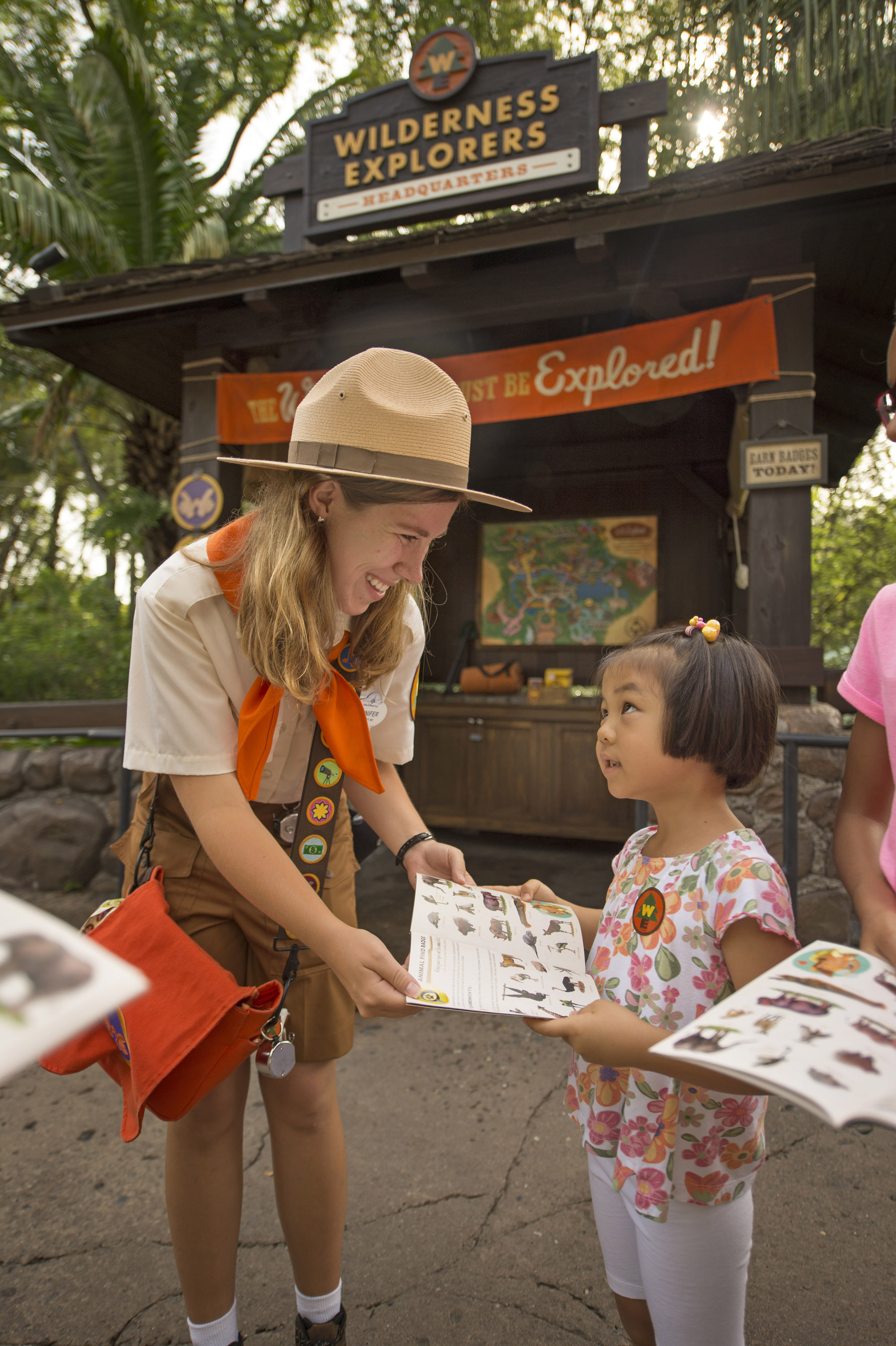 Walt Disney World’s Animal Kingdom has so many fun but educational areas of the park, it really allows families to get to know a little geography while exploring the animals of the area. If you are travelling with a family of any ages, I think you’ll love the Animal Kingdom as much as our family does.

If you have your own favourites about Disney’s Animal Kingdom, I’d love to hear them in the comments below.

Check out my other Disney Posts: