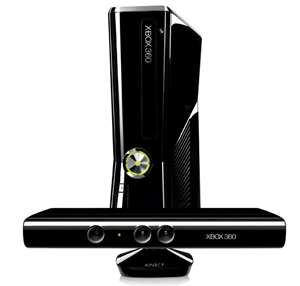 The Xbox 360 S is here with its sleek look and powerful features in Happy Holiday Bundle. Featuring a glossy black finish, a 250GB hard drive and Wi-Fi capability, the Xbox 360 250GB console brings you to the brink of innovation and the future of gaming. The exciting Kinect sensor lets you literally climb into the game and control your entertainment with the wave of a hand using advanced motion-sensing technologies. Built-in Wi-Fi provides a faster and easier connection to Xbox LIVE to stream HD movies and TV shows or download games. The internal, removable 250GB hard drive offers plenty of space to save games, HD shows and movies and more.
The Xbox 360 250GB Kinect Holiday Bundle offers you everything you need to start gaming right away. Your body

becomes the ultimate controller as you jump off of the couch and into the game with Kinect. With no other remotes or accessories, your every movement translates on the screen to give you total control of the action — and it all starts right out of the box with the included Kinect Adventures and Carnival Games: Monkey See Monkey Do games. If you’re in the mood for more traditional gaming, this Holiday Bundle includes a wireless controller that lets you control the action of your favorite games from up to 30′ away from your console. Your gaming and entertainment world expands online with the included three-month Xbox LIVE Gold membership. Engage in global competition, and download movies, games and sports. With its sleek new black design, this super-quiet model of the Xbox 360 console delivers a wide variety of entertainment options and the intuition of the future. 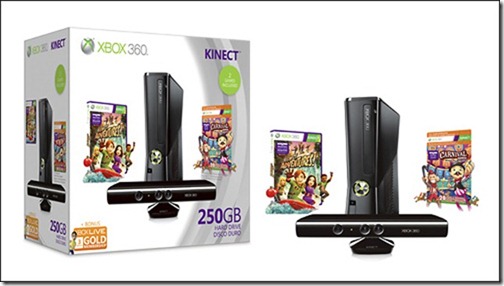