Disneyland is my favourite of the two North American Disney parks. Although it makes for a lot of walking, it has everything in one place so you can spend the day with many options for fun, especially if you stay on resort. But, that comes with a higher price tag. Fortunately, there are several reasonable options within shuttle or walking distance nearby at Best Value Hotels at Disneyland.

The Disneyland Resort makes the best of a small space.  You can stay at one of the three resorts and never leave Disney property during your entire stay.  Guests at a Disney hotel enjoy convenient short walks to almost anywhere in the resort they want to go.  But the starting price for a room at the cheapest and least convenient Disney hotel is over $300USD per night.

These luxury hotels are expensive, far from the best value hotels at Disneyland. However, the space around Disneyland has been lodging tourists for almost as long as Disneyland has been open.  The area was once littered with cheap motels before Disney made some serious changes in the early 2000s. Now, there are still hotels, but they are held to a higher standard; and because they are not Disney, they are much cheaper with just a short walk or shuttle ride away.

This cute hotel is very clean and very close to the East side of Disneyland.  It’s near the Harbor and Katella intersection on the convention center side. Rooms are available starting in the low $90’sUSD and they have very popular kid suites.

Grand Legacy at the Park

This small but stylish hotel stands right across Harbor Blvd. from Disney’s California Adventure.  You can see Guardians of the Galaxy from the spacious rooftop bar and even watch the fireworks at night.  The Grand Legacy offers rooms and suites with a variety of luxury levels and also provides group rates and Disney park ticket sales.  Rooms start at near $100USD per night and the location is one of the most convenient for walking to the parks, or to the nearby Garden Walk.

The Hilton towers over Convention way, just across the street from Disney’s California Adventure.  It’s a short trek to the Eastside gate, but also offers shuttle service to the concourse for convenience.  The Hilton offers elegance and class while accommodating families with small children. It doesn’t have the Disney details, but it is about half the price of the cheapest Disney Hotel, Paradise Pier.

Castle Inn and Suites is just a little bit more expensive than the Hilton, and what it lacks in sophistication, it makes up for in fun a theme.  It’s not Disney level theming, but it does capture the imagination and help get you in the Disney mindset. The hotel is on Harbor Blvd., right across the street from Disneyland.  The rooms have outdoor access and the pool is nothing special, but you can get a decent room for less than $150USD per night. The atmosphere is pure fun and it’s great for kids.

Sheraton is right around $150-$200USD per night.  It’s near the back end of Disney’s California Adventure, on the intersection of Harbor and Katella, very close to the Hilton and the Portofino.  It shares the same convenience of location with a slightly better edge for walkers. It also has a similarly modern style and clean, simple elegance compared to those hotels as well.

Finally, there is the Peacock Inn and Suites where we stayed on our last visit to Disneyland. Being that we are a large family, we chose a suite with 2 bedrooms that offered a King in one, 2 Queen beds in the other and a pullout sofa bed with a small dining area. This was a great size for a hotel room and suited our family of 6 nicely. The bonuses were a continental breakfast and shuttle to and from Disneyland. Rooms run $120-$200USD per night, depending on dates of stay and room chosen. 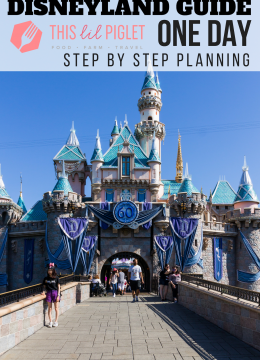