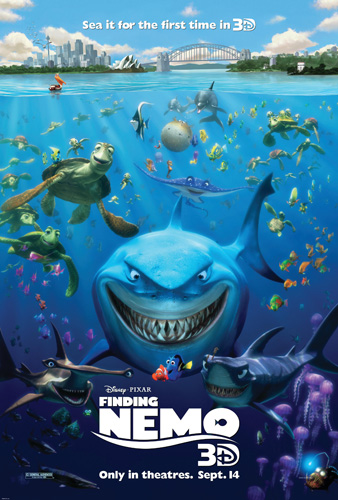 Academy Award®-winning film “Finding Nemo” returns to the big screen for the first time ever in thrilling Disney Digital 3D™. In this stunning underwater adventure teeming with memorable comedic characters and heartfelt emotion, “Finding Nemo” follows the momentous journey of an overprotective clownfish named Marlin (voiced by Albert Brooks) and his young son Nemo (voiced by Alexander Gould). When the two are unexpectedly separated in the Great Barrier Reef, Nemo is carried far from his ocean home and deposited in a fish tank in a dentist’s office. Buoyed by the companionship of Dory (voiced by Ellen DeGeneres), a friendly-but-forgetful blue tang fish, Marlin embarks on a dangerous trek and finds himself the unlikely hero of an epic effort to rescue his son––who hatches a few daring plans of his own to return safely home.

A new Disney•Pixar short, “Partysaurus Rex,” will make a splash in theatres this fall in front of “Finding Nemo.”  The short, directed by Pixar veteran animator Mark Walsh and produced by Kim Adams, gives a starring role to Rex and also features Buzz, Woody and the rest of the “Toy Story” gang.

>>  “Finding Nemo” won the 2003 Academy Award® for Best Animated Feature, and was nominated for Original Screenplay, Original Score and Sound Editing. The film was also nominated for a Golden Globe® Award for Best Motion Picture–Comedy or Musical.
>>  At the time of its release, “Finding Nemo” was the highest grossing G-rated movie of all time. It remains the fifth highest grossing animated film worldwide.
>>  In 2008, the American Film Institute named “Finding Nemo” among the top 10 greatest animated films ever made.