Hasbro Toys for the Little Ones

The adorable BABY ALIVE REAL SURPRISES BABY doll gives little girls the experience of taking care of their very own baby. The REAL SURPRISES BABY doll features “rock-a-bye” eyes that can open and close, speaks 30 different phrases and will even tell her mommy when she wants to be fed. Just like a real baby she can sometimes be a little picky about what she wants to eat.

This baby shakes her head from side to side to let her mommy know what she likes and what she doesn’t! REAL SURPRISES BABY wets and soils and girls can use one of the included diapers for a quick change. The REAL SURPRISES BABY doll comes with 12 different accessories including a bib, diapers, food packets, bowl, spoon, bottle, and a pacifier. Requires 3 “AA” batteries, demo batteries included. (Age: 3 years and up) 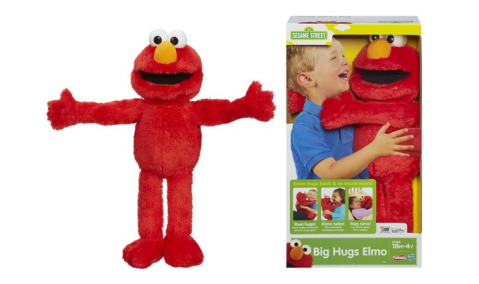 Little ones are sure to fall in love with Hasbro’s first feature Elmo toy that can hug them back! When tots give their red furry friend a hug, Elmo will wrap his arms around them to show how much he loves them! This cuddly 22-inch lifelike Elmo has flexible arms and a soft head.

He sings a sweet song about hugs and a bedtime lullaby, and encourages pretend play. This all new design makes the BIG HUGS ELMO Hasbro’s largest, cuddliest, most lifelike Elmo interactive plush ever! Requires four AA batteries, not included (Power Up With Duracell). Available at most major toy retailers nationwide. (Ages 18 months and up)

ELEFUN is ready for a new adventure; now he’s found FIRE FLIES! In addition to butterflies, now he wants his preschool friends to help him catch glow-in-the-dark fireflies! The all-new ELEFUN game will offer Preschoolers two ways to play with their favourite Elephant friend! (Age: 3 years and up)

Up the ante during battle with the SHOGUN STEEL SAMURAI CYCLONE BATTLE set, straight from the SHOGUN STEEL television series! A complete battle right out of the box, each set comes with an exclusive Cyclone stadium that spins and shakes during competition adding more strategy to the battle.

The set also features two exclusive launchers for more powerful launches and two BEYBATTLE TOPS in exclusive deco with Synchrome Technology which allows Beybladers to take the metal wheels of two tops and combine them into one for a heavier top with double metal power. Set includes two five-piece BEYBATTLE TOPS, two exclusive ripcord launchers, one assembly tool, and two collector cards that can be used to battle other Beybladers online at BeybladeBattles.com. Available at most major toy retailers. (Age: 8 years and up) 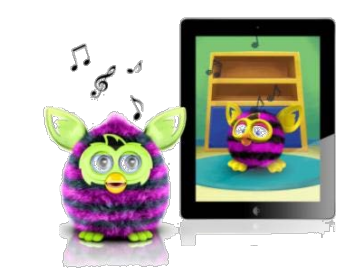 A global sensation following its 1998 debut and one of Holiday 2012’s hottest playthings, the FURBY brand has solidified its place in pop culture history. In fall 2013, the creature with a ‘MIND OF ITS OWN’ will once again revolutionize digitally-integrated play and surprise and delight fans of all ages with the introduction of the state-of-the-art FURBY BOOM creature. Featuring all the ‘magic’ and personality of its predecessor plus twice the content, the new FURBY BOOM creature combines physical and digital play for a fun type of entertainment experience including the ability to hatch digital FURBLING friends. The FURBY BOOM creature takes kids on a digital adventure via their mobile device as they raise, care for and play games with their playmate. (Age: 6 years & up) 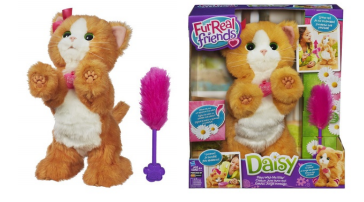 DAISY PLAYS WITH ME KITTY pet can rise up on her back legs and bat her paws, lower onto all fours and knead her front paws. She even pounces forward, mewing and purring as she plays. A day full of fun makes for one tired kitten. When it’s time to wind down DAISY PLAYS WITH ME KITTY pet loves to cuddle; stroke her back and this kitty will gently purr and knead her paws as she relaxes. Includes four “AA” demo batteries. Four “AA” replacement batteries required. Available at most major toy retailers nationwide.(Age: 4 years and up) 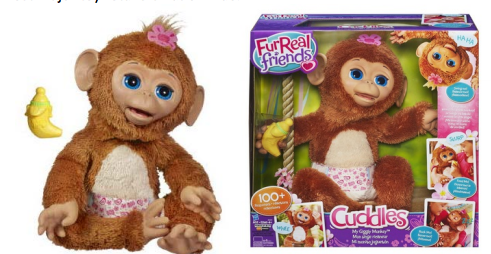 These dolls are especially ready to strike any fashion pose with articulated knees and elbows. Girls can choose between RAINBOW DASH, FLUTTERSHY and RARITY dolls, each with a variety of fashionable accessories including a colourful ponytail hair clip that girls can also wear. Each doll sold separately. Available at most major toy retailers nationwide. (Age: 5 years and up) 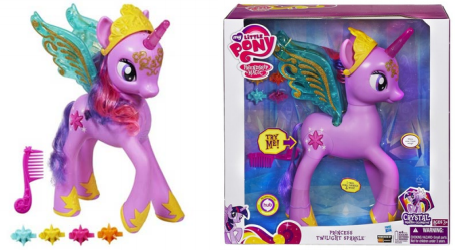 Her iridescent turquoise wings and unicorn horn illuminate with a touch, creating enchanting patterns of light. Push her along and watch as PRINCESS TWILIGHT SPARKLE pony’s wings flutter as if she was getting ready to take flight! Includes four “AA” demo batteries. Four “AA” replacement batteries required. Available at most major toy retailers nationwide. (Age: 3 years and up)

The MY LITTLE PONY DESIGN-A-PONY assortment lets girls customize two of their favourite pony characters. Whether it’s adding moons to PRINCESS LUNA or making sure FLUTTERSHY wears her heart on her hoof, girls will adore making these pony friends all their own. (Age: 3 years and up)

Shoot. Score. Share! The N-SPORTS CYBERHOOP set lets players turn any room into a virtual stadium and challenge themselves or friends to a basketball showdown. To begin play, fans simply download the free CYBERHOOP app on to their iDevice. Once the app is downloaded, players can select from one of five basketball challenges to start shooting hoops!

The CYBERHOOP set transmits players’ scores to the smart device and the app provides exciting commentary, tracks game stats and captures games on video. Players can share their coolest shots from each game in an epic highlight reel or even play virtually with friends online via the app! The N-SPORTS CYBERHOOP set includes hoop, ball, and free app download. (Age: 8 years and up) NERF REBELLE GUARDIAN Crossbow

An impressive crossbow with fast-flying dart action and flexing bow arms, the NERF REBELLE GUARDIAN Crossbow blends blaster action with crossbow precision. Slide the front handle to flex the bow arms back and ready the blaster for play. Pull the trigger and watch the bow arms propel forward as darts soar up to 75 feet toward the target. By holding the trigger and pumping, players can instantly transition between single shot and multi shot mode, unleashing a rapid stream of darts for exciting nonstop action! Includes six collectible NERF REBELLE darts. Available at most major retailers nationwide. (Age: 8 years and up) NERF REBELLE Accessory Bag 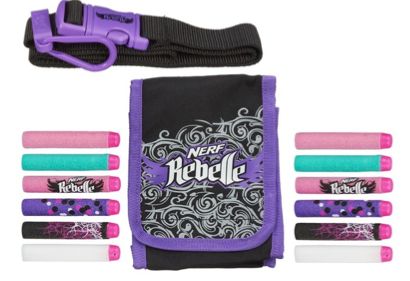 Always make sure back-up ammo is within reach and reload on the go with the NERF REBELLE accessory bag, a stylish pack with ample room for storing accessories. The accessory bag features a pouch for holding darts, and includes 10 collectible darts. Available at most major toy retailers nationwide. (Age: 8 years and up) 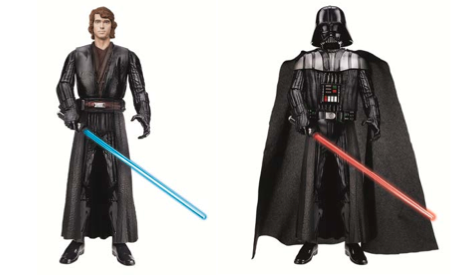 Hasbro introduces a breakthrough action figure innovation to celebrate the rise of DARTH VADER with the STAR WARS ANAKIN TO DARTH VADER figure. Standing at 13-inches tall, this figure changes from ANAKIN SKYWALKER to DARTH VADER by attaching the helmet and armor, and includes iconic movie phrases, sound effects, and a LIGHTSABER that changes from blue to red. (Age: 4 years and up)

BEJEWELED has never shined brighter! With 91 three-dimensional gems, Hasbro’s BEJEWELED game brings PopCap’s incredibly popular digital game to life. Players will sparkle and shine as they swap gems to create matches of three or more to collect coins and win! The game also comes with a download of the Bejeweled 3 online game. Additional terms and conditions apply to digital download offer. (Age: 8 years and up/Players: 2-4) 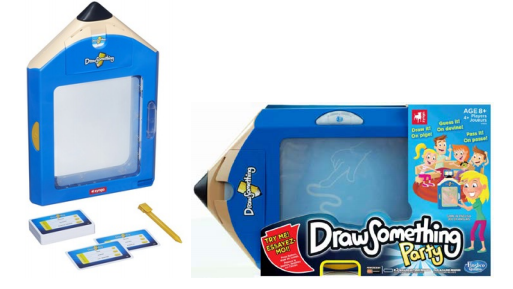 Bring your party to life with this light-up drawing screen that lets the whole party play at once! Players can draw on the light up screen with their finger, or the stylus included in the game, and watch their creations come to life. Players work together in teams as they draw clues and shout out guesses to earn coins. Teams race against a timer to win coins by guessing correctly. If time runs out, the other team gets a chance to win the coins! Player chooses one of three words, ranging from easy to difficult. The more difficult the word, the more coins your team wins. (Age: 8 years and up/Players: 4 or more) 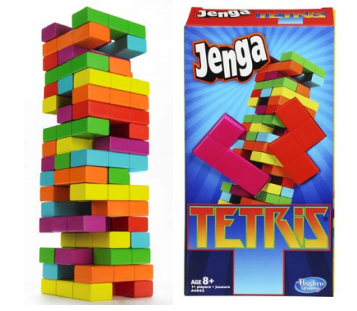 What do you get when you combine two of the world’s best-known stacking games? The answer is JENGA TETRIS®. It’s sure to be a party as players push, pull and stack the iconic TETRIS shapes into a JENGA tower like you’ve never seen before! Keep the game going for as long as you can by competing to build the tower to the greatest height possible! (Age: 8 years and up/Players: 2 or more)

It’s all about the bling! This quick-action game challenges girls to twist, snap and clap to keep the beat to more than 20 different handclap games found online at Twister.com. With each movement, the rings light up and change colour. If you complete the handclap games in perfect sync, all rings in the game should start and finish on the same colour! The TWISTER RAVE Ringz are perfect to bring along wherever your day takes you for impromptu gaming fun. Girls can check out online videos at PlayTwister.com to learn new skills and tricks! (2 electronic Ringz per pack; each ring requires 3 button cell batteries – demo batteries included). (Age: 8 years and up/Players: 1-2)

Get ready for a new level of fun with the all-new TWISTER RAVE Hoopz game! The longer you go, the more you glow. This game will have girls up on their feet as they try to keep the TWISTER RAVE Hoopz spinning and the LED lights illuminated. Each time you see all the iconic TWISTER colours (red, blue, yellow, and green), you’ve conquered the TWISTER RAVE Hoopz trick! With more than 20 different tricks available at PlayTwister.com, along with online videos to level up their skills and tricks, the TWISTER RAVE Hoopz fun never ends (2 electronic Hoopz per pack; each hoop requires 2 AA batteries – not included). (Age: 8 years and up)

Choose tiles, arrange them in your tile rack and see your words come to life in real time as you place them on the WORDS WITH FRIENDS game board. Similar to ZYNGA’s WORDS WITH FRIENDS mobile game, Hasbro’s game enables players to take turns placing tiles onto the game board, building upon opponents’ word creations with their own. Bonus spaces such as Double Word or Triple Letter let you rack up even more points and the player with the highest word score at the end of the game wins! (Age: 13 years and up/Players: 2-4)

ENTER TO WIN 1 OF 5 PRIZES FROM HASBRO TOYS 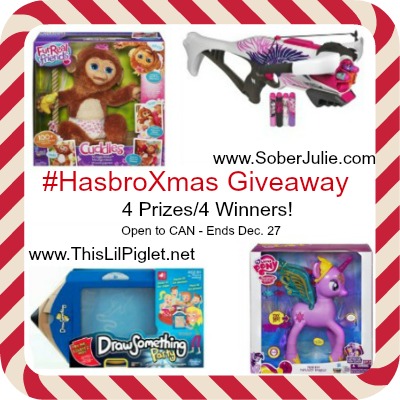 This Holiday season the generous folks at Hasbro Toys have provided us with 4 PRIZES to giveaway to 4 very lucky Canadians. Entry is simple, just follow the instructions on the Giveaway Tools form below.

This giveaway will run until December 27th, winners will be contacted via email they provide and have 48 hours to respond. Winners will not choose the prize, this will be chosen for them. Good luck!!

If you’re looking for Christmas gift ideas for more people on your list, make sure to check our the rest of our Holiday Gift Guide features.

Disclosure: We were provided with product in exchange this advertorial. All opinions are my own. 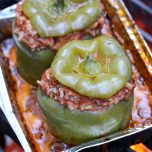